A little day trip to Sintra was an all around success for my friend and I. Sintra is super easy to get to from Lisbon, so if you ever find yourself in Lisbon, I highly recommend taking the train to … END_OF_DOCUMENT_TOKEN_TO_BE_REPLACED

It has been awhile since the last time I posted a recipe ):  and it’s not because I have not been cooking/baking because I have been. More so the former than the latter (despite this recipe), but it is more so because I have been extremely busy and what I have been making hasn’t been all that mouth dropping, gotta share asap, the imaginary smells will tantalize you from your computer screen and persuade you into going and making the dish. A little overboard? nah. But mostly I have been eating lots of lentil & veggie dishes which if you have ever made lentils then you know that they are definitely not the most appetizing looking dish what with the mush appearance and all. I have had a good number of nights of cooking dinner with friends and a superb international potluck dinner last Friday for which I made a peach cobbler (recipe to come) that was a slam-dunker, but otherwise I have just been impromptu cooking and am usually too hungry to pause and photography my food before diving in. 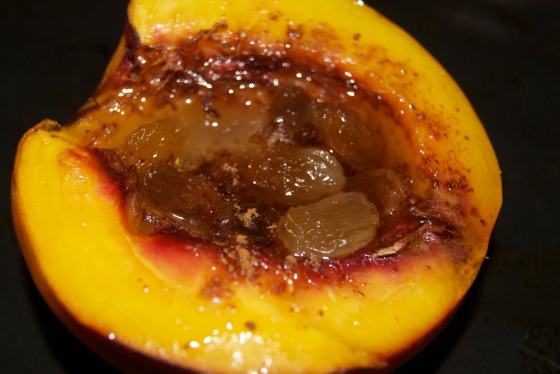 However, one morning (awhile ago) I wanted something warm and comforting, but I also wanted to get some of my daily fruit. If I was only able to eat one food group for the rest of my life, it would be the fruit group and yes it does win by a landslide.

Now these are super simple to make –> trust me I made them in a toaster oven –  #joysoflivingabroad.

1 nectarine, cut in half and de-pitted

cinnamon (to your liking)

Place the nectarine halves on a baking sheet (they might drip a bit, so you might want to use baking parchment if you have on hand, otherwise you might need to scrub your sheet a little post-bake)

Drizzle with the maple syrup. Sprinkle with the cinnamons and raisins

Bake for 20-25 minutes at about 350F. Enough so that they are nice and soft, but not too long to where they start entering into the drying out phase.

Additions: Some people I know also add some butter and some sugar – you can if you like. Honey would be good to, or agave for a vegan option. Apples are a great option too (my original plan was baked apples, but I found out I had a bad apple when I cut into it – no bueno)

This can be eaten for breakfast or dessert or well quite frankly anytime of the day because they will warm you up from the inside out and put a gigantic smile on your face…that is until they are all gone and you realize that you should of made two whole nectarines instead of 2 halves. Blimey.

Cheers from the kitchen in my Turkish flat